One of the aims of the BlueOS structure is to make it easier to develop, provide, install, and use integrations than in the original Companion software. This post provides a general overview of the structure (as it currently stands), and describes our design intent for how extensions can be integrated most effectively. The system isn’t finalised yet, and we welcome discussion into the methods suggested here, along with whether there are particular details/permissions/access that are important to cover/include, or perhaps whether some alternative integrations system would work better.

The core BlueOS functionality is run within a Docker container, which allows it to stay isolated, and be updated independently of other code/services running on the device.

To those unfamiliar with Docker, it’s a way of keeping code environments/programs isolated while still having access to the underlying operating system. One isolated program block is called an “image”, which when run forms a “container”. Several containers can be run at once.

The web interface searches/scans for webpages (running on BlueOS) that are accessible via TCP ports which are configured to ‘listen’, and can be accessed by external users (server at IP 0.0.0.0). Those webpages are then listed at ≣/Tools/Available Services, along with documentation if they provide it: 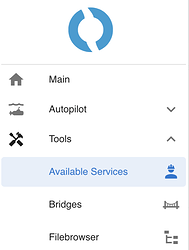 As many of you are likely aware, the old Companion software has a beta integration of DVL functionality focused on the Water-Linked DVL-A50. While DVL support is undoubtedly useful, it’s device specific and also not something that everyone with an ArduSub device needs to use, so in BlueOS that is instead implemented as an external integration, which users can enable if it’s relevant.

@williangalvani has worked hard to make the BlueOS-Water-Linked-DVL repository, which serves as an example of what can be done already. The relevant functionality (communication with the DVL, sending mavlink messages, etc) is implemented with Python, and there’s a web interface created using the Flask library.*

At the moment installation is handled by ssh’ing into the Onboard Computer (ssh pi@companion.local, password=raspberry), and telling docker to run the desired container. Docker then tries to find it locally (on the device), and when that fails it searches the specified location in DockerHub (requires wifi) and downloads and runs it automatically. That process requires the Docker image of the relevant code (built using a Dockerfile) to be pushed to and hosted on DockerHub.

*Implementation Note: Flask is just one possible way of creating a webpage. Many of BlueOS’s core services use uvicorn to serve FastAPI-based webpages (which are self-documenting). The Version Chooser service uses Connexion, which is a self-documenting wrapper around Flask. It’s also not a requirement to use Python if you don’t want to (e.g. the camera manager and mavlink2rest are both written in Rust).

The main web interface will have a dashboard, to display information from the most important services. We’re intending to make it possible to embed web views from custom services as part of that dashboard, so that custom integrations can be presented prominently if desired.

To facilitate embedded views we’ll likely need to define some form of registering interface, where a service can present itself as view-compatible, and the user can choose between available views/services to display.

We’re planning to make a ‘web store’ type page which allows a user to find and select integrations/extensions they’re interested in from within the BlueOS web interface. That will likely require some level of standardisation of the installation process for extensions, but comes with the significant benefit that extensions would become effectively plug-and-play for users.

Different extensions require access to different things. Some will require access to connected peripherals (e.g. USB devices), and many will likely require some level of access to mavlink messages from the autopilot, as well as the ability to send mavlink messages to the autopilot and/or topside. It’s also possible that certain integrations will want/need to communicate with or interface with other extensions.

We’ll need to make these available, but for us to get this right from as early as possible it’s important for us to know what kind of extensions you’re interested in making - please feel free to comment below with extension ideas you may be interested in, or think others may find useful

As BlueOS and various extensions evolve and add new features, it’s important to make sure that the user’s version of BlueOS is compatible with a suitable version of an extension they want to install. The same idea applies for extensions that need to work together. There are two main ways this can be handled, and we’re interested in your preferences:

At this point there’s no way to extend core functionality (e.g. to add an extra camera type) without running a modified core image. It’s possible this problem can be avoided to some extent by splitting off commonly extensible functionality into its own Docker container (in which case you could replace just the camera module for example), but there remains the potential issue of a user wanting multiple integrations that replace the same component (e.g. to support two extra camera types), and replacing/overriding core functionality could mean the user misses out on useful updates for that component.

In cases like this it may make sense for us to make an intentionally extensible module, which supports some simple microservices to add some kind of common functionality. This is quite a challenging and nuanced issue, so please contribute to the discussion if it affects you and you have ideas or preferences on how it should best be handled.

While we of course intend to document all the functionality of BlueOS, along with how to develop for/with it, please let us know if there are particular topics you would like to see covered first, or concepts you’re particularly interested in examples of or resources for

7 Likes
Sea-Terrain Analysis ROV - An Open Development Project
Installing ROS on BlueROV companion
Companion 0.0.31 Update - DVL merge
New Name: Companion 1.0 -> BlueOS
Why is updating firmware so complicated?
Customizations on BlueOS
Using conductivity sensor with BR's flight controller and QGC?
Why do USBL systems cost so much?
Pixhawk or the new navigator for research
T200 How to start it, simple programing in Python Raspberry 4B
What to do if one of the output channel in pixhawk is not working
How to connect Bluerov2 to DVL
BlueOS official release
Water Linked DVL A50 Support
Raspberry Pi3b+
QGC map does not show ROV icon and wake
BlueOS official release
New Product: The Navigator Flight Controller and BlueOS!
OpenCV AI Kit (OAK) - 4K+stereo ML camera options
How to read digital input from Navigator and show its value in QGroundControl?
Adding on to BlueOS web interface
No module named v20.ardupilotmega
BlueOS 1.0 BETA testing
Connecting BlueROV to Micron mk3 Sonar
Open GoPro API
EliotBR (Eliot) Listed November 1, 2021, 8:40pm 2
Walter265 November 25, 2021, 11:24am 3

Thanks for sharing this blog found lots of info keep it up.

How exactly does BlueOS identify “Extensions?” I see that when the WL DVL driver is loaded it appears in a new “Extensions” section. We are working on a BlueOS hosted version of SonarView. Thanks.

How exactly does BlueOS identify “Extensions?”

The extensions architecture still isn’t fully stabilised, and hasn’t yet been documented, so the available information is quite limited at the moment. I’m planning to write the initial docs for the extension system within the next couple of weeks.

For something to appear in the Extensions menu

our helper service looks for open tcp ports, probes them in http, and if they have a valid “register_service” file, it creates a menu link.

Note that we’re also making an Extensions manager to handle easy discovery, installation, updating, and removal. The requirements for an extension being findable by the manager (online for new ones, and onboard for installed ones) are independent of the requirements for showing up in the menu section, and will be covered in the documentation.

Perfect. Thanks for those links.