Hi,
I’ve been trying to integrate a WayFinder DVL on my BlueROV2.
There is an Integration Guide available here https://github.com/Teledyne-Marine/Wayfinder which I try to use to help me.
I tried to change the pixHawk parameters from QGroundControl as it is said, but some parameters are unfindable:
EK3_GPS_TYPE=3
GPS_TYPE=0
VISO_TYPE=1
VISO_DELAY_MS=10
VISO_ORIENT=0

I didn’t find them in the full parameter reference of px4.
How can I find them and what do they change ?
Thank for any help, I’m new to this

Did this ever get resolved? I have version 4.1.0 and am also not able to find the listed parameters. Trying to access them in QGroundControl. 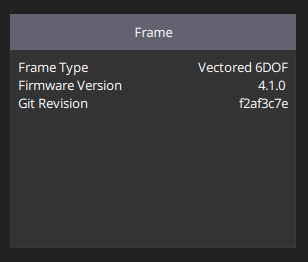 I’m not certain what’s going on here, so I’ve asked about it internally and will get back to you.

It’s possible some of the parameters won’t appear until visual odometry is enabled (may require a vehicle reboot after setting VISO_TYPE=1).

I’m also getting an error when updating PSC_VELXY_P. Guide recommends setting the value to 14: 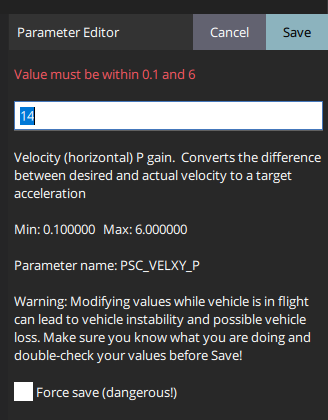 Apologies for the delay getting back to this - I’ve recently arrived back home from travelling, so should have more reasonable response times again now.

Setting VISO_TYPE=1, and restarting, opened up many of the parameters that were needed. Thanks!

Glad to hear it

However, one of the parameters that I need to change, per the Wayfinder/BlueROV integration guide, is EK3_GPS_TYPE. I see a EK2_GPS_TYPE only.

EK3_GPS_TYPE was removed from ArduSub before 4.1.0 became stable, so you won’t be able to find it in the latest 4.1.0 version. I believe it should be sufficient to set the EK3_SRC1_* parameters instead, e.g.

I’m also getting an error when updating PSC_VELXY_P. Guide recommends setting the value to 14
…
Any suggestions?

Not certain what’s best to do there - the recommended value in the guide may have been determined from a slightly different version of the position controller, in which case maybe it’s best to follow the firmware’s default limits (6), but at the same time those limits may have been determined using other vehicle types and not tuned/corrected for ArduSub, in which case maybe it’s fine to ‘force save’ the guide value (14).

I’ll ask internally whether our main ArduSub developer has any insight, but no guarantees of a proper response to that one until Teledyne confirms, or re-determines the values with ArduSub 4.1.0 stable. Perhaps @petecrai (from Teledyne) has some idea?

Is there any update regarding the value to put ?

I’ll ask internally whether our main ArduSub developer has any insight but no guarantees of a proper response to that one until Teledyne confirms, or re-determines the values with ArduSub 4.1.0 stable.

Following up on this, the response I received (from our developer, not Teledyne) at the time was that

14 is pretty high, but I don’t expect major changes between the beta and stable in that regard. Force saving is fine. Those defaults have gps in mind, which is a LOT noisier than dvls, though I think we suggested something in between.

Unless Teledyne responds with some alternative, it’s probably worth starting with their specified values (using force save as necessary) and then adjusting if performance is poor.