I am currently working on a project to develop and build a ship’s hull cleaning ROV. The ROV is going to be fairly heavy(60kg) and is going to suction itself to hulls to perform cleaning - Simplified, we are building a Roomba for ships :). Jokes aside, the weight and suction warrant the need for quite a lot of motors. The basic configuration needs 12 times T-200 motors. The full version would need at least 16 motors. Check the image for better understanding. 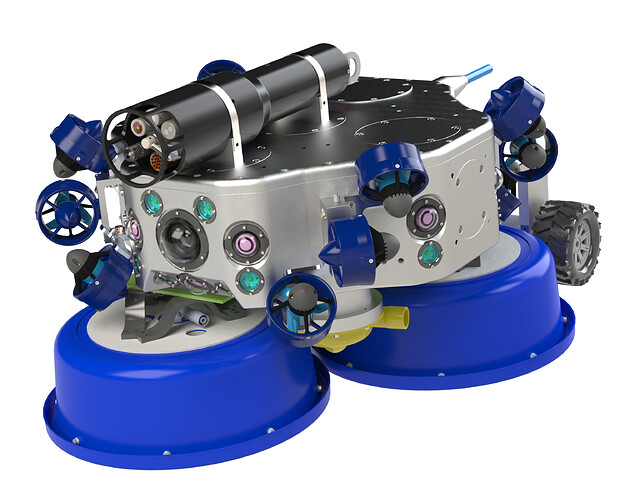 For control we will use the Pixhawk 4 and Ardusub software. I have been scouring the stable 4.0.3 code and the internet for a way to use at least 12 motors with current Ardusub software. We don’t need any other functionality from Ardusub like lights, gimbals, camera… only stable control. From here on are my ramblings, discoveries and questions that I would love to get fact checked on

Thank you all in advance!

Have a great day!

Hi @Fluyer2, welcome to the forum

The output channels are defined using the SERVOn_FUNCTION parameters - if an output is configured as a motor then it can’t simultaneously be configured as something else, so there shouldn’t be conflicts once the parameters are set appropriately.

I don’t believe this should be necessary. Configuring the outputs as motors will stop the other functionalities from occurring.

Camera functionality on our ROVs is handled via the onboard computer (Raspberry Pi), so is unrelated.

I expect it would primarily be handled with parameters and an appropriate frame configuration, but there are currently only motor parameters up to 12, so you would need to add additional ones. I’m also not certain whether motors 9-12 are actually implemented in ArduSub, so I’ve asked internally and will get back to you.

That’s not something I have experience with, but also that may not be possible for every output, depending on the flight controller’s capabilities.

As a couple of alternatives, you may be able to

I’m also not certain whether motors 9-12 are actually implemented in ArduSub, so I’ve asked internally and will get back to you.

Following up on this,

Everything points to 12 being possible in current code.
…
Up to 16 will require some more changes, unless [you] can re-use [(double up on)] some motor outputs.

Thank you so much for the help! I will post my findings in this thread right after I fix the problems with compiling the stable version

Thank you, this helped a lot. I successfully build and programmed the custom software. I can confirm that 12 motors work with only changing the frame. If necessary for the project I will play with 16 motors (will upload here the solution if successful).

Regarding the custom frame is there any documents that thoroughly explain the calculation for the motor factors? I find it confusing when comparing the BlueROV1 and the vectored ROVs. The BlueROV1 has different and “logic/expected” factors while the vectored ROVs only have +1.0f and -1.0f in correct spots.

Please correct my understanding. Motor number 1 in SUB_FRAME_VECTORED_6DOF gives 100% of its thrust to yaw in clockwise direction - therefore 1.0f. But why isn’t the forward factor -0.5f and lateral factor 0.5f? Since it is giving “half” of its thrust to these directions… This concept is quite important for me to understand because our ROV is not fully symmetric (see the top and bottom motors on the same corner)

Regarding the custom frame is there any documents that thoroughly explain the calculation for the motor factors?

We don’t yet have great docs on that, but you may find these useful:

Please correct my understanding. Motor number 1 in SUB_FRAME_VECTORED_6DOF gives 100% of its thrust to yaw in clockwise direction - therefore 1.0f. But why isn’t the forward factor -0.5f and lateral factor 0.5f? Since it is giving “half” of its thrust to these directions… This concept is quite important for me to understand because our ROV is not fully symmetric (see the top and bottom motors on the same corner)

the factors are normalised by the relative strength of all available contributions to a given motion type, so ‘small vertical’ maps to 1.0 if all other thrusters contribute ‘no vertical’.

The reasoning there is that the thrust factors are scalers for the output, so if no normalisation is done then it’s unintentionally limiting motion directions that don’t have a thruster directly aligned with them.

A notable caveat is that

… the motors do have a full speed however, which from what I understand ArduSub doesn’t really know/care about, so if you’re driving your ROV hard then one or more motors can saturate (run at full speed) while others that partly contribute to the same motion aren’t yet, so trying to increase motion in that direction will increase the not-yet-saturated motor speeds but can’t increase the saturated ones, which means ArduSub’s understanding of the forces it’s applying isn’t correct, so the control doesn’t work as well.

This is cool. I’m wondering trying to build some suction cups into the BlueROV2 to fix it while carrying out a task. Could I pick your brains on your approach for the suction?

We were never successful with suction with ROV due to the failure in the design of pumps - too little suction. We tried it without the ROV only cleaning attachment and stronger pumps - It sucked itself so much to the surface no human was able to move it. I think it could work nicely. But after suctioning to the surface I would suggest some wheels or tank tracks because using only the motors would produce jerky motion because of the stiction and friction forces and the point of force being high = high torque tiping the ROV.

I overcame the problem of sticking to the surface with changing to manual flight mode and pushing down. This way it was able to align itself really nicely with the surface. Here is a link to video: 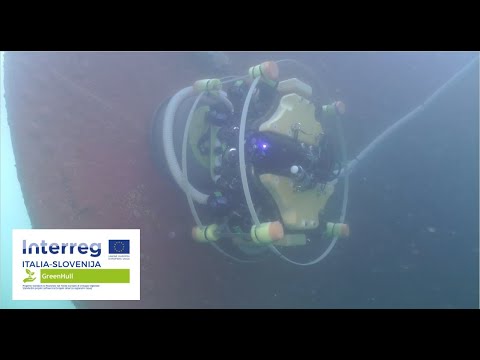 Hi @Fluyer2, thanks for the follow-up!

It’s always cool and interesting to see a design that gets put into action, and find out what works well and what could/should be improved

I’ve edited your comment to embed the video, so it’s watchable from within the forum