We need Altitude AND Depth, some of us will be using sonar altimeters…

We need Altitude AND Depth, some of us will be using sonar altimeters…

There is a ‘Rangefinder’ field that is intended to be used for this case.

Good to know, thanks Jacob.

Hi Jacob,
I reinstalled the latest version. I think windows downloaded updates at the same time as I upgraded QGC. Where can I find an older version to download?

Whilst on the message board. Has anyone had an issue running QGC and Mission Planner on the same hard drive?

@Teggles the previous version is here. Please let me know if it works.

I recommend against using mission planner to operate ArduSub. I don’t think there is any support for ArduSub in Mission Planner. There could be conflicts running mission planner and QGC simultaneously, but it should be fine to run them individually on the same computer.

Thanks Jacob, I will try reinstalling the previous version and let you know the result. I do run mission planner and Ardusub separately.

Hi Jacob.
I removed QGC, rebooted, and reinstalled from your link and rebooted. The link is to firmware ver. 3.5.1 and git ver. 28fdbf65. - same issues. Only now in safe mode, if I have the camera gimbal on input ch8 and the output on 8, and select camera down on the controller, the mount will motor fully down and then back to its original position. After that no camera movement. At least it proves I am getting power to the servo! Possibly roll back to an even earlier version of QGC?

I removed QGC, rebooted, and reinstalled from your link and rebooted. The link is to firmware ver. 3.5.1 and git ver. 28fdbf65. - same issues.

This sounds like it is not a problem with the new version, but an issue with the installation or registry. I’m not well versed with how to fix these sort of things with Windows, so I will have to find out from the other developers how to troubleshoot this and follow up with you.

Only now in safe mode, if I have the camera gimbal on input ch8 and the output on 8, and select camera down on the controller, the mount will motor fully down and then back to its original position. After that no camera movement.

Possibly roll back to an even earlier version of QGC?

I am sorry you are having trouble with this @Teggles. I will do some homework and follow up with you as soon as I can.

@Teggles Does QGC work ok in safe mode? Your graphics driver may have got an update that does not allow QGC to run in the default mode. Safe mode is just a different graphics rendering scheme.

Are you having any issues other than the camera tilt, and default mode does not work?

Hi Jacob,
In the default mode, the attitude indicator, compass and none of the buttons work. I just get a still picture from the camera.
In safe mode all works except for the camera tilt. As an aside to you have a forecast of when the camera stabilisation problem will be fixed? I often work in turbulent water and it worked really well!

Hi Jacob,
This morning I disabled my intel HD graphics 4600card and that has cured the QGC problem! Now I am just left with the camera tilt issue.

Hi Terry, can you please save a parameter file and send it to support@bluerobotics.com? If you can include a video of the behavior that will be helpful too.

If you have a stock BlueROV2 and want to go back to our factory settings, you can reset all of your parameters to the BlueROV2 defaults from the Frame tab on the Vehicle Setup page. Your calibrations will not be erased.

I’m having trouble linking the Ardusub to my wifi. I have multiple WiFI networks on campus, it doesn’t seem to pick up the ones that provide internet. Is there a solution to this? It also looks like it’s creating doubles of certain networks. Only seeing 4 in total, none that are relevant to internet access!

Hi Vincent, larger administrated networks are a bit different, and may not be compatible with the method that the software uses to connect to the internet. You can download this zip file, then use the ‘upload zipped update’ option instead. Please let me know how it goes.

Any one had issue displaying current on the compass?

It always shows “-1A” no matter how fast the thruster goes, which jepardizes the ROV safety when swimming. Other parameters are all good. Maybe it is locked somewhere in the setting.

Restoring the factory setting has regained control of the camera tilt system, even the stability system works! Disabling the graphics card enables QGC default mode but is an issue with other programs. Safe mode works well with the card enabled so I am happy to continue with that.

Many thanks for the help Jacob.

@305155973 , you must enable the battery monitor from the Power tab of the Vehicle Setup menu. For the Battery Monitor, select ‘Analog voltage and current’ for the Power Sensor, select ‘Power Module 90A’. Then reboot? 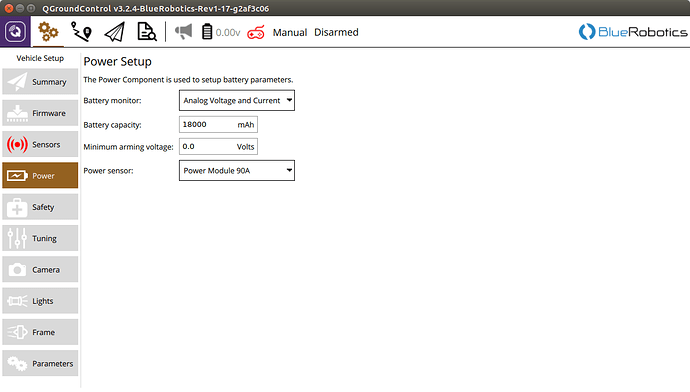