We want to steer your attention toward something new and exciting today: the Navigator Flight Controller and BlueOS software! 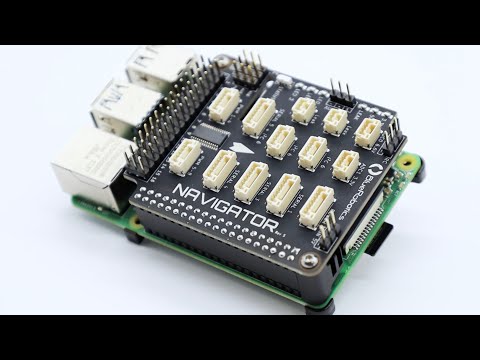 The Navigator is an ROV and robotics flight controller for the Raspberry Pi 4. It has an onboard IMU, compass, barometer, and ADC sensors as well as 16 PWM outputs and numerous serial and I2C expansion ports. The Navigator will soon be used on the BlueROV2 in conjunction with the BlueOS software, but can also be used for a wide range of robotics applications!

The Navigator is essentially a Raspberry Pi “hat” (although we can’t technically called it a hat because it doesn’t meet all of the Raspberry Pi Foundation’s precise rules for that). It plugs into the Raspberry Pi 4’s expansion header and provides a plethora of sensors, inputs, and outputs needed for ROVs and general robotics applications. It runs the same ArduSub (or any ArduPilot) software that the Pixhawk currently runs on the ROV, but now that software runs directly on the Raspberry Pi in Linux rather than on a separate microcontroller. This brings everything into one place, providing a cohesive user and developer experience.

It has plenty of room for expansion and its connectors follow the Blue Robotics Connector Standard, making them compatible with many off-the-shelf devices like GPS, radios, rangefinders, and more. It comes with a heatsink that keeps the Raspberry Pi cool even when used in enclosed environments like on an ROV, as well as expansion cables to make it easy to connect to your device. There’s a slot in the board that allows you to use the Raspberry Pi’s camera connector still. 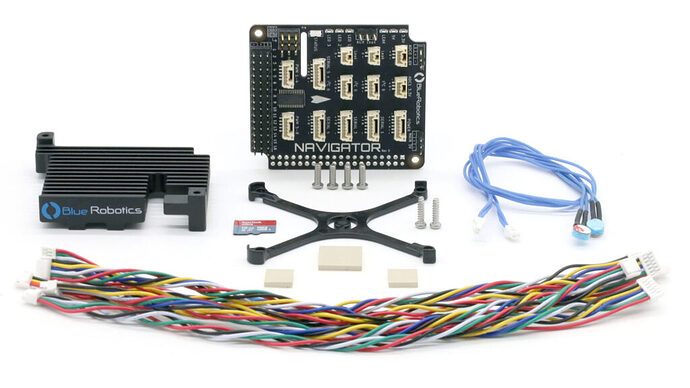 We designed the Navigator and BlueOS primarily for the BlueROV2, but keeping in mind general flexibility for lots of other applications. As well as ROVs, the Navigator is well suited to use on ground robots, drones, surface vessels, remote sensing, and more! It is compatible with the ArduPilot flight control software, but can also be used with direct access to the onboard sensors and outputs. We hope to provide libraries to make that easy in the future, but for now, we are sharing its open-source schematic for reference for any advanced users.

There is a lot more technical information and details available on the product page here. 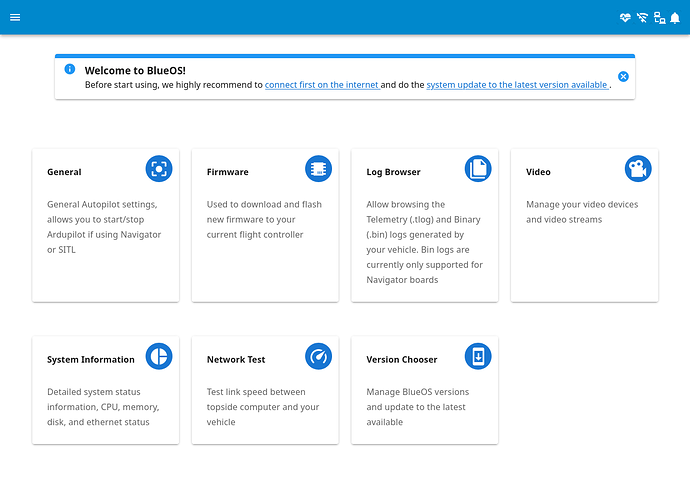 Along with the Navigator, we’re announcing BlueOS, our new core operating software that runs on the Raspberry Pi and provides a host of tools and services. It replaces the “companion” software that has always run on the Raspberry Pi computer on the ROV. BlueOS is not a true operating system like Linux or Windows, but rather a collection of software that runs alongside Linux. But, like you’d expect from your computer’s operating system, it provides tools like system monitoring, process management, software updates, network configuration, user interface, and user defined extensions. It has a browser

BlueOS works with the Navigator, but can also be used with other flight controllers like the Pixhawk. Any ROV, no matter when it was purchased, can be upgraded to BlueOS!

BlueOS will be an ongoing project and will continue to evolve with new features! Our first release is available now and ships with the Navigator and you can also download and install it on your own Raspberry Pi SD Card. You can learn more about BlueOS in this forum post here!

Note, we have the original Pixhawk autopilot available as well for those who need it! We’ll be retiring it once we run out, but we still have a number in stock.

That’s all for today! Thanks for reading. If you have any questions or comments, please join the discussion on our forums!

I like the navigator flight controller and BlueOS…Does it support raspberry pi 3b+?

I believe the Navigator is RPi4 only (as mentioned in the post), but I’ve asked internally and will confirm.

BlueOS should run fine on an RPi3B+.

I believe the Navigator is RPi4 only (as mentioned in the post), but I’ve asked internally and will confirm.

The Navigator depends on the new bcm2711 chip in the RPi4, so it is indeed RPi4 only.

Are you planning to keep the retro compatibility with the Pixhawk? Or BlueOS will be developed focusing only on the navigator flight controller?

3 posts were merged into an existing topic: Relay integration with the navigator board

Hi @matosinho, welcome to the forum

BlueOS and Navigator are separate projects. BlueOS is open source software, and isn’t even confined to being used as part of a vehicle - we have no plans to lock down which flight controller(s) it supports. At the moment it supports at least Pixhawk, Pixhawk 4, and Navigator, with some level of support for other ArduPilot compatible flight controllers. Other controllers and firmware types may get added over time, particularly with community contributions

I am curious if and how this Raspberry Pi can be retrofitted into an existing ROV2?
Ervan

I am curious if and how this Raspberry Pi can be retrofitted into an existing ROV2?

A Raspberry Pi 4B by itself is very easy to fit in - it just replaces the existing Raspberry Pi 3B and can have all the connections the same.

I suspected it was a swap-out. I am somewhat cautious about swapping out the Pixhawk but if the Navigator is a better option, we’ll consider it along the Pi. Thanks.

I upgrades to the Navigator and everything seams to be working except the nmea injector. I also posted on the cerulean forum aswell

Hi,
Are there any plans to add a can bus port (or two

) on the navigator?
How about DroneCAN (UAVCAN v0) support in BlueOS?

I upgrades to the Navigator and everything seams to be working except the nmea injector.

Which part of the NMEA injector is not working as expected?

Indeed - I’d recommend you take a look through the feature comparison table on the BlueOS release post, which mentions that for the Ping Sonar devices

MAVLink pipeline
not yet supported (#264 )

Given the board has only recently been put into mass production, I don’t expect there will be major design changes in the near future. If it’s possible to accomplish via a software or firmware change in ArduSub or BlueOS to change / switch the function of an existing port then it may be an option

I don’t believe it’s something we’re working on internally, but BlueOS is designed to be extensible so that may come about via an external / community effort, particularly once we’ve stabilised the BlueOS API and released the extension system in an accessible form

3 posts were merged into an existing topic: Navigator/BlueOS NMEA GPS not working

Thanks to @dgudiel for all the hard work!