To have better ergonomics for ROV control I got dual Flight Controllers working with QGC
It is Saitek Rhino X56
To make them work with QGroundcontrol You have to emulate their output into one X-Box format.
Ie QGC believs there are only one standard X Box controller connected.
That also means You can only have that many commands/buttons that a X box has.
A way to make this work is x360ce emulator: http://www.x360ce.com/ 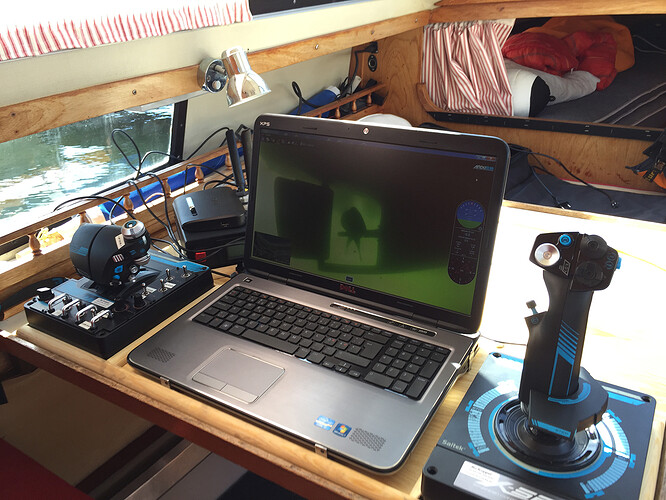 I don’t understand why QGC still only supports X-Box controllers. Back during the initial beta testing it supported HID compliant controllers but later that compatibility was lost. Is there any way we can get it back? That would allow us to use more sophisticated controllers without the need for an emulator.

Newer versions QGC support more controllers.
Even my joystick above, BUT only one at a time.
So with my setup using 2 controllers, You have to use emulator for a while longer…

@Boko Awesome research into this! I kinda like having the bigger joysticks and I wonder if this emulator would work with two of the Logitech 3D joysticks. I already have one so I might have to get another and try it out.

Page 1 of 9 - UJR - Universal Joystick Remapper (Using vJoy) - posted in Gaming Scripts: What is it? A program to combine axes, buttons and the 1st hat from any of your physical joysticks into one or more 8 axis, 32 button virtual joysticks. it...

I don’t understand why QGC still only supports X-Box controllers.

The joystick libraries were overhauled at some point last year. Support for HID was probably lost there. I would like to be able to support more methods of input, such as joysticks like this, custom built controllers, and keyboard input. This isn’t a priority at the moment, but it will happen.

@jwalser any update on support for other joysticks? Seen any newer setups
@Boko That’s a nice setup. I’m looking at the X56 but I’d like to use a single controller. I see you use both left and right hands. I’ve read that up and down (depth) needs to be controlled by an analog input. Is it possible to control depth up and down using only the right hand controller? Or would controlling all motions with one hand be too difficult. I’ve been looking for a USB single axis finger joystick but haven’t had any luck. That would let me control all steering from the right hand (X56) and up and down from a small paddle style joystick that I could probably mount to the base of the X56.

Is it possible to control depth up and down using only the right hand controller?

any update on support for other joysticks?

PS4 and PS5 gamepads have limited support, and

there are several customers and distributors who have designed and sell custom controllers for use with the BROV2: https://discuss.bluerobotics.com/search?q=custom%20controller

Since those results are a bit spread between other kinds of controller, I’ve made a new #surface-controller tag and gone through and added it to a few that seemed relevant.

For future improvements, last year we got changes made to the MAVLink MANUAL_CONTROL message to support additional buttons and control axes, but they’re yet to be implemented in the ArduSub firmware or QGroundControl. Progress on that is in the issues linked to at the end of that one.