I’m working on a submersible platform that makes use of extremely low power Arduino boards like Sparkfun’s Thing Plus. We are interested in attaching a camera to this submersible just to give people a view of what’s going on around their system while its underwater. It looks like there are many ways to go about adding a camera and recording ability to the Arduino platform, but I’m wondering why not just attach a GoPro inside one of the already available waterproof enclosures? I’m not sure that adding camera capabilities directly to our platform is worth the development and debugging and power management headaches that would come along with that. Anyone else been in a similar situation and what did you decide?
Thanks,
-Matt

Hi, Matt.
We had a similar scenario where piloting camera was not enough. We even machined a GoPro Bracket for a 3" enclosure flange to have an option to quick swap cameras in water. And it works like a charm for recording and watching afterwards. But live streaming anything but piloting camera has some bottlenecks like maximum bandwidth of the Pathom Tether system and absence of GoPro enclosures with USB-C connectivity that could be trusted to house a GoPro with no door. This one turned in to a disaster for us. So we stick with original underwater housings for this application using a method described here to control and check status of the GoPro but with a penetrator connection to companion computer issuing script commands.

Our last gig included a lot of ROV work with divers around. And we found QR code GoPro control to be super helpful for it. Just print some codes for the divers and have your 100% hands free operation. 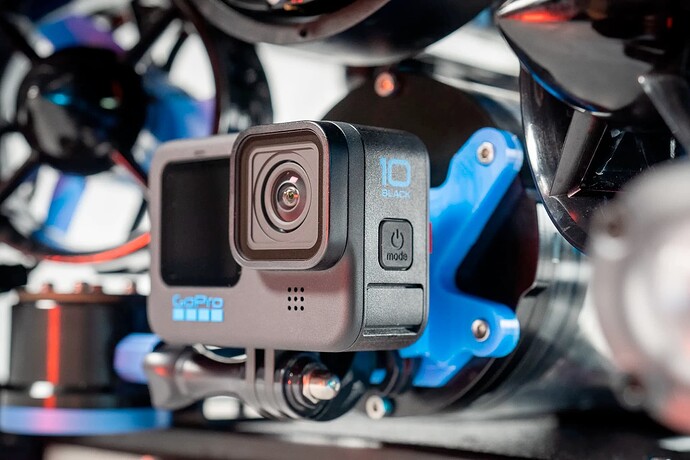 As @Scottsky mentions, GoPros can be great for recording a dive and viewing the video afterwards, but the challenge comes from getting a low-latency live stream to the surface.

It’s not impossible to get a stream set up, and you may be able to use the GoPro API if you want communications to go via your vehicle’s existing communication process, but at that point the integration complexity is likely similar to using other camera options, and presumably more complex than cameras that are designed to interface with the kind of board you have, which makes it less of “a no-brainer” and more just “one possible option”, with its own tradeoffs.

Hi @MattHixson , we do a lot of GoPro integrations. As mentioned, they’re not without their challenges, but it can be done. We haven’t found any bandwidth bottlenecks, since the GoPro HDMI output is not a high bitrate, especially when recording. If you can get your hands on a GoPro 4 you can easily output an analog signal and run that over coax to a topside screen/TV (though streaming the analog feed will reduce it’s quality)

It is even possible to have full control of the camera, which we’ve done by writing some software on an adjacent Pi and issuing bluetooth commands over an ethernet connection from a custom GUI on the topside laptop. Get in touch if you’d like more info

Thanks for the replies. My specific case is for a non-tethered submersible with no need for live streaming. Sounds like a simple GoPro external mount is going to be the simplest and easiest solution for us.