Hi all,
I am working on a tethered drop cam. I have two goals. High quality video and I want to be able to pan 360 degrees. (Roughly 360)

Originally, I thought I would use a motor and place the camera in an acrylic cylinder and have that pan. But then the problem is that I don’t want the acrylic distorting my view and also I would have to find a way for the lights to rotate along with the camera.

I came up with the following: put everything into a 4 inch stainless cylinder and make the whole thing rotate using thrusters. (Stainless because I’m very good at welding stainless.) It would be tethered using the BR cable. And probably some extra safety line.

I know if it’s difficult just by looking at a drawing…but does anyone think this will rotate freely? Or not. I’m just trying to get some feedback before I go cutting and welding and machining flanges. Any feedback is greatly appreciated. This is not neutrally buoyant.

Nothing is to scale on this drawing. 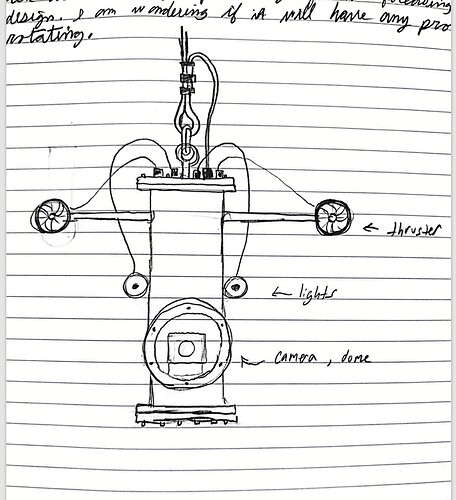 Hi, your design will work. If you go into stab mode it should keep your desired heading.
I would suggest more lights though. Also, have you considered to slimline the design? The thruster arms do not need to be long at all as the T200 thrusters are quite strong and would easily rotate the can even if they are placed close to the can. Personally, I would prefer the lights on arms rather than the thrusters as that will give you less refraction on your video.
Having said all that, I feel compelled to say that the cost of your project including machining of the flanges and so on will be more expensive than just make a SIMPLE_ROV3 version ROV. You are just 1 thruster away. Unless the drop cam is your dream. 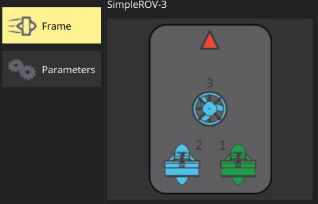 Cool idea! I agree, the thrusters likely don’t need to be separated so far from the housing to induce rotation, especially if you want a slow and controlled rotation. You could also get away with just one, running at minimum speed? Or, don’t use them at all, and just add a plate at top off-center - most drop-cams end up experiencing a current, as the water motion at depth doesn’t match that of the boat on surface? So just lowering it into these conditions may lead to the camera rotating, albeit at an unknown rate. Lumen lights are great, you may find those perform better if separated from the camera and angled differently, so particles in the water column don’t blind your view!
Will the camera be looking horizontally? Or is there a second one looking straight down? There have been some cool designs that use back to back domes and a 360 camera to get the visibility you’re after.

Hi thank you for your reply. It’s good to know that the thrusters will work close to the exterior. That makes my life a lot easier. Can you please tell me more about the light placement? Would you recommend placing the lights above the camera?

As for the cost, I do most the metalwork myself, including the machining. The drop cam is the dream and if things go well next year, I’d like to try pushing it to 200 or 300 meters in 2024. Thanks again.

Hi Anthony thank you for your reply. I’m glad you mentioned using a single thruster, I may try that first. The camera will be looking horizontally and yes, once I get everything working I plan on adding a camera that looks straight down.

Any advice on where to place the lights relative to the camera?

Hi Jim!
For a horizontal camera, I would put the light on the bottom or top of your pipe, pointing parallel or angled inwards towards the camera’s horizontal view. Once you get to a camera on the bottom, you may find a downwards facing light, attached as far off-pipe axis as possible gives good exposure.
I’d also mention that the low-brightness levels achievable with the lumen are a game-changer for pitch-black, benthic conditions. Above about 70% brightness a lot of detail can be lost! I helped demonstrate this with a video recorded of a subsurface float and a prototype lumen long ago:

Depending on how much rotation there is you may have issues with the tether getting quite twisted, but it’s unlikely to be a big issue unless you’re intentionally spinning for extended periods in one direction. I agree with the others comments on the power of the T200s with respect to the lever arm lengths.

If you’re not planning to add any kind of pitch control, and are already making a custom welded enclosure, I expect you’d likely benefit more from an additional camera and set of lights facing the other way than from having the thrusters. That way if you have wide angle lenses on your cameras you can record 360 degree footage and correct for the orientation in software (potentially after the fact), and save a bunch of resources and space needed for controlling the thrusters. For an idea of what could be possible I’d recommend looking at some recent Insta360 videos. 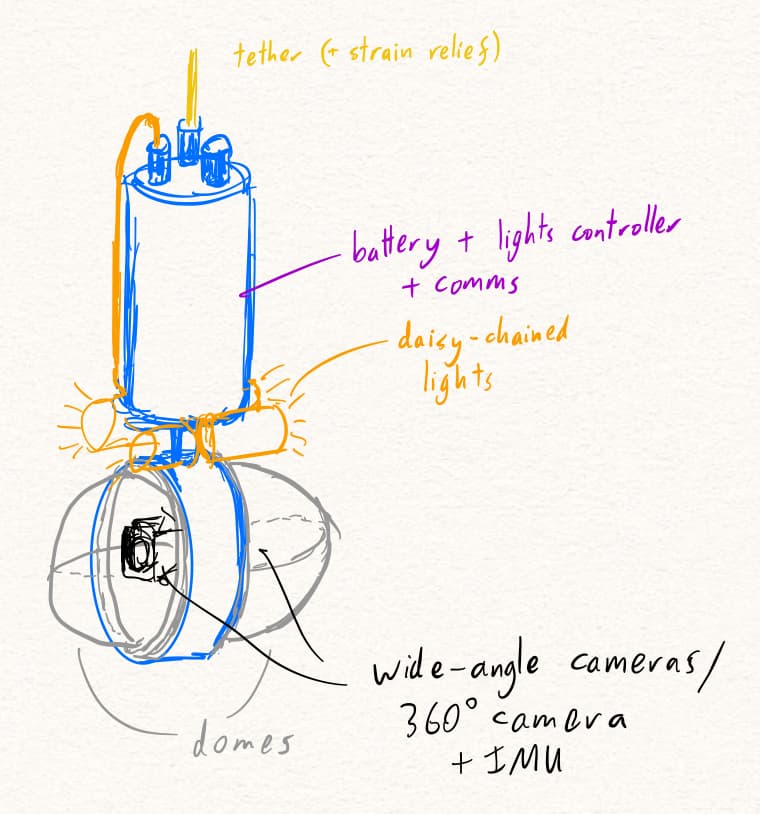 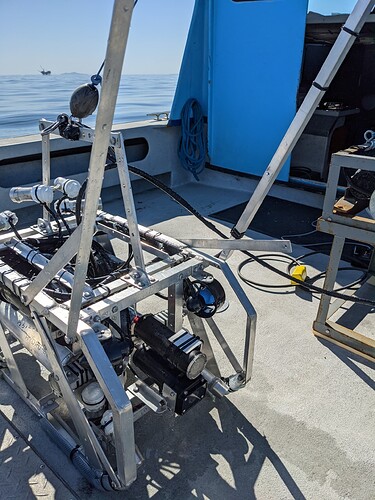 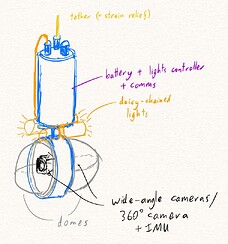 It seems someone else has had a similar idea - I’m told this uses our 4" domes.

I’m assuming that hasn’t been developed entirely in the past two weeks, so presumably they had the idea a while ago

I had some students who put a 360 camera in a similar dome on top of a custom-built ROV (using many BR parts). We took it to Greenland to study icebergs: 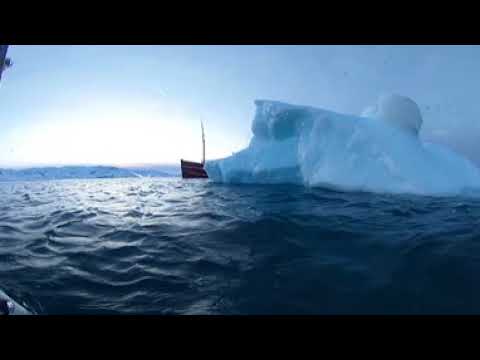 This is super cool @nuballawalla, thanks for sharing!

I’ve edited your comment so the video is embedded (instead of needing to go over to a separate tab to view it).

Neat that YouTube seemingly has pretty decent 360 video viewing capabilities. Dragging around the camera view under an iceberg feels unreal, and that area is stunning!

Thanks for Sharing. I’m starting to see that it may be useful to incorporate an exterior frame, even if it’s just to keep my camera from tipping over.

I work around rocks, ledges, and wrecks with lots of things to bang into, and get caught up on so the frame is needed to protect the delicate parts. Its also worth noting that anything that protrudes from the ROV should be designed to break away (to some degree) in the event it becomes snagged and you have to winch the vehicle up. For example, on this drop camera I have a light bar about 36" tall hanging out in front of the cameras. It pivots on bolts in the side of the frame, and it is held up in place by a number of zip ties. If it gets snagged on something I can winch the camera up and it will break the zip ties and the lights will swing down below the sled. So far this has saved me a few times. Just something to think about in your design.

Thank you Nathan. One of the problems with a solo project build is trying to stay ahead of everything. I never even thought about the dome getting trashed on some rocks or getting hung up on some debris. I live on Long Island Sound which is shallow, rocky (extremely), and has strong tides. I am going to build a frame, for sure.

hi. thanks for sharing. indeed whole new experience viewing below water with 360 camera… what camera is this, good clarity, able to provide more info of this camera?