I am adding two additional cameras to my BlueROV2 and need to feed their USB3 cables from separate enclosures into the electronics enclosure to connect to the raspberry pi. Unfortunately the USB head is too large to fit through the penetrator. I have read some discussions on this forum related to this same issue.

I’m wondering if the following would work - drill out a hole in the end cap large enough for the USB 3.0 head to fit though, then seal it off with the marine epoxy. Ive read mixed things about the marine epoxy, in some cases it sounds like this leads to leaks. I would use a USB3 type C head so the hole that I would need to seal would be about 12mm in diameter. Curious if anyone has any thoughts.

Rather than cutting and then filling holes in the end cap, I expect it may be preferable to cut the cable so it can be installed through a penetrator*, and then rejoined inside the enclosure.

Note that doing so may be fiddly, and if possible you’ll want to maintain the shielding and ideally also the twists, which could be tricky.

*Note: Depending on how the cable is connected to the camera, it may be possible to disconnect the camera side and slide a penetrator over that, instead of needing to cut the cable.

Epoxy with a strong interface to the materials it’s connected to** can be decent at compression seals, but if it’s filling an endcap hole then it would be loaded in shear and tension by the water trying to push through from the side, which is unlikely to hold up well unless you’re only operating at very shallow depths, or are able to weld on some kind of support plate around the cable, but that would be difficult to do and likely destructive to the cable in the process.

**Note: a strong bond with epoxy requires chemical compatibility (often fine) and good surface preparation (requires some attention to detail), as well as appropriate setting time and temperatures. Surfaces should generally be roughened (e.g. with fine-grit sandpaper or a file), and cleaned with acetone wipes (acetone is a cleaning agent, but can also help to roughen cable jackets through chemical abrasion).

This is the least problematic epoxy-based solution I can think of, but I still wouldn’t particularly trust its waterproofness under pressure: 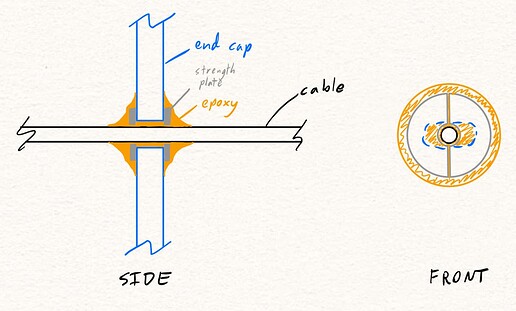 The “strength plate” on either side could potentially be a cut washer, or maybe a couple of them stacked, rotated so the cut lines don’t overlap. The idea being that the internal diameter is as close as possible to that of the cable, and the external diameter transfers load to the endcap so it doesn’t all need to be taken by the epoxy in shear.

Tension could still be a problem from cable pullthrough, but that’s less a problem of water pressure and more a problem of operating conditions. It could be mitigated somewhat by including some form of strain relief, and ensuring the cable doesn’t get pulled from either side.