I am building an autonomous surface vehicle for use in very warm environments. I want to house all the electronics in a single plastic enclosure (pelican case or similar) that will enable RF transmission. However, since it’s very hot outside (>40 degC) I want to make sure the electronics don’t overheat. I am looking for a waterproof plastic enclosure with passive external heatsinks (no external fans), preferably on the bottom of the enclosure.

Googling hasn’t turned up many OTS options. There are some rugged computing enclosures but most have fans and I want to use passive thermal management, since I can put the heatsink on the bottom of the enclosure in contact with the water.

I thought I’d ask the BR brain trust before I go out and build something myself. Anything out there?

This isn’t something I’m experienced with, but I’ve asked internally in case someone knows of something useful, and will get back to you if there are suggestions

I am looking for a waterproof plastic enclosure with passive external heatsinks (no external fans), preferably on the bottom of the enclosure.

Presumably the most effective passive cooling approach would be either an entirely metal case, or one with a metal base that’s embedded in the plastic walls, to allow the thermal energy to flow straight through with minimal resistance. Of course your application means the full metal ones are less useful, although perhaps it’s possible to combine a plastic one and a metal one together.

Vertical “fins” protruding down into the water could also help, although they may help marine growth to take hold which could be problematic on longer term deployments.

That said, it seems somewhat unlikely such a case would have been designed without explicitly having marine applications in mind. Maybe try searching for something like “marine waterproof enclosure thermal transfer” to see what comes up.

Hi Daniel -
I’ve wrestled with this exact situation before! I’ve gone the metal box, external radio route, as well as the plastic box, internal radio route. For cooling, aggressive internal air circulation was sufficient enough to move the heat out, but my ambient was closer to 30 than 40C, and may have had less heat to dissipate then you.
I would suggest a plastic enclosure (the nema 4x series options from polycase.com are great), and a repurposed PC water-cooling hardware set for your application. You’d put the pump, fan and large heatsink in enclosure, and just pull new water through the system continuously. If this leads to fouling issues, you may have to place the radiator in the ocean rather than the enclosure, and target your cooling internally with strategically located water-cooled heatsink blocks? Or perhaps something with a peltier cooler? Or cutting out and replacing a face of the box with an aluminum plate or heatsink, and fiber-glassing it in place for a water-tight seal?
Have fun!

… I’ve asked internally in case someone knows of something useful, and will get back to you if there are suggestions

Following up on this, a couple of suggestions from members of the BR team:

I would probably do it with a few heat exchangers and active liquid cooling. There are a few examples in the model boat industry and cooling their brushless motors.

(this seems similar to what @anthony-white has just suggested)

I’m unsure on your size requirements, but Rusty was wondering

Could [you] use one of our enclosures, but make a plastic flange for the other end?

That way you could have an aluminium flange and endcap that can sit in the water, with an acrylic tube, and then some form of plastic flange-cap (or a plastic flange with one of our acrylic end-caps) at the top side.

I’m making a V2 version of a mini-ROV. The first version had some issues with ESC’s overheating. On this second version, I used a heat pipe on the outside potted in a BR penetrator that connects to a heatsink/heatblock on the inside that all the ESC’s are thermally connected to. See attached screenshot.

You could potentially do something like that using the water as a infinite heatsink. 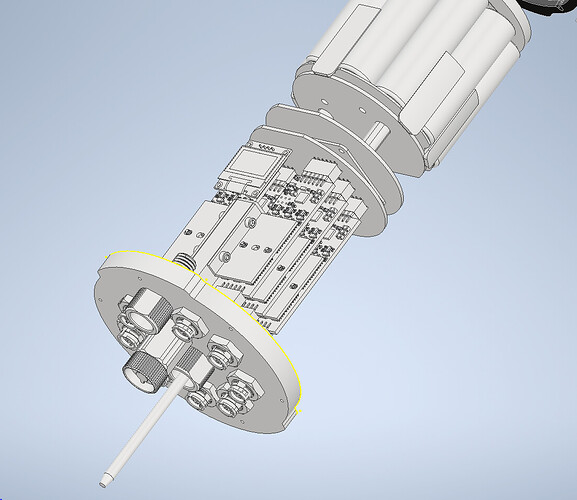 Thanks for all the suggestions so far.

Vertical “fins” protruding down into the water could also help, although they may help marine growth to take hold which could be problematic on longer term deployments.

I like this idea. Should be simple to implement.

@anthony-white - thanks for the link to polycase. Their products look nice. I thought of cutting out a section of a plastic case and epoxying a sheet of aluminum over the hole. I’m leaning towards this or vertical fins.

@kklemens - I looked at liquid cooling. I know people do it but it makes me nervous. Maybe it’s time to give it a try.

@rjehangir - I could use a BR enclosure with an aluminum flange on the bottom. Do you have any outer plastic coverings for your enclosures? I tried something similar a few years ago but the enclosures themselves heat up quickly when they’re out of the water. I taped it up to reflect the sunlight. That worked, but it looked sloppy. I could print something to go around the enclosure.

@hube268 - that’s an interesting solution. I have some scrap stock rod that I could run through a cable gland. this one looks like the easiest solution so I think I’ll start with it.

Do you have any outer plastic coverings for your enclosures?

That’s not something we offer, and seems like overkill since that’s like making an enclosure for the enclosure. If the clear walls are allowing in too much heat you could