Is the Ping360 sonar signal harmful to humans?

Hi @lqiangsdut, welcome to the forum

Definitely an interesting question, and one that it makes sense to ask.

The very short answer is “no, it’s most likely not harmful”.

The reasoning behind that has quite a few components that are worth considering/discussing, so I’ve included some sections to try to keep things neat and clear.

The Ping360 transducer is in an oil-filled section that helps to minimise sound loss while in the water. Pressure waves (e.g. sound) have some component that gets reflected when they hit something with a different density to the material they’re in (which is how sonar distance detection works), and at the oil-air boundary that density change is very significant, so very little sound comes out from (or in to) the sonar in air. That’s why the Ping360 doesn’t work in air, and is why ultrasounds for medical imaging will use a gel couplant to ensure the sound waves can actually get between the transducer and the human/animal being scanned.

According to the Wikipedia article on hearing range:

The commonly stated range of human hearing is 20 to 20,000 Hz. Under ideal laboratory conditions, humans can hear sound as low as 12 Hz and as high as 28 kHz… The human auditory system is most sensitive to frequencies between 2,000 and 5,000 Hz.

That article also includes information about animals, and the highest recorded animal hearing ranges go up to 115kHz for little brown bats, 123kHz for beluga whales, and 150kHz for porpoises and bottlenose dolphins.

The 750kHz used by the Ping360 is well above those ranges, so shouldn’t be damaging or detectable to the hearing of humans or animals.

The Ping1D uses 115kHz, which humans can’t hear but is potentially at least detectable by those particular animals, and may be worth considering when operating near them (especially given the three highest-hearing options are marine life that tend to spend most of their time within 50m of the surface)

Effects on the Body

When humans are in the water while a Ping360 is being used, the sound waves can enter the human body, so the question remains of whether that could be harmful.

I went looking for medical information on the application and safety of ultrasound, and found this resource, which describes various procedures and potential safety concerns. The main biological effects can be summarised as:

All effects are made more pronounced by higher power and longer exposure, which intuitively makes sense (more energy in → higher likelihood/strength of effects).

Any distance-measuring sonar transducer can only transmit for a brief period before it needs to wait for the returning echo signal to take distance readings. This means the exposure time is in very short pulses. Those pulses are closest together if only measuring a short distance away, although that also tends to reduce the maximum reasonable pulse length.

Looking at the available sensor settings in Ping Viewer, the shortest settable detection range is 1m, for which the longest transmit duration is 128us (default for 1m is 5us), and to make sure the next reading is as soon as possible the speed of sound can be set to 1550m/s (for normal operation salt water is generally ~1500m/s and fresh water is less). 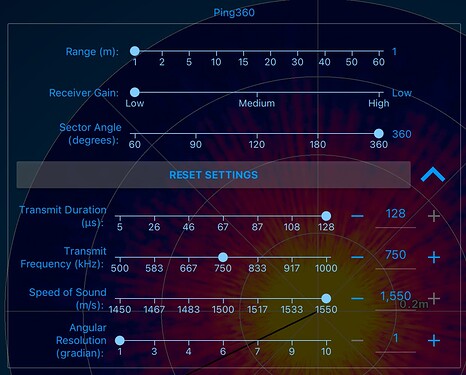 Our transducers are custom made, so we don’t yet have extensive data on their sound power output, but an upper limit can be estimated by measuring the electrical power used by the Ping360 in operation (power in → circuit power + motor power + transducer power + heat).

With the pictured settings, and powering my Ping360 with 16.56V (measured), I measured a base current of about 180mA, and an extra ~70mA when the transducer is briefly transmitting after the motor step. That measurement is quite rough, but is the best I can do at this point. That gives a power output of 16.56V \times 0.07A \approx 1.16W. I also measured the time for a full revolution as about 10 seconds, which for 400 steps (1 gradian per step) means one pulse every 25ms.

The ultrasound beam is spread over the 2° x 25° beam-width (technically a bit broader, but for conservatism and ease of calculation we can assume the full beam’s energy is within the specified region), which covers an area of approximately 155cm^2 per meter of separation distance from the transducer.

For comparison purposes, the medical resource I linked to specifies that an I_{SPTA} = 26-163mW/cm^2 is ‘relatively low’. To understand what that means, this resource says that I_{SPTA} is the spatial-peak temporal-average intensity, which means it’s the highest concentrated beam region intensity, averaged over the time between subsequent pulses.

Taking into account that the transducer is rotating at 0.9 degrees per step, the 2° horizontal beam-width ends up with just 1.2° overlap with the previous pulse, so the I_{SATA} \approx 0.43mW/cm^2, and even that is only true for two pulses before the sonar has moved on.

The end result of all that is that even taking a highly unrealistic worst-case operating scenario (1m ping range, shortest possible gap between pulses, 25x longer transmit duration than the default, person very close to the sonar) we’re still seemingly two orders of magnitude below a ‘relatively low’ strength medical comparison, and that’s only applied to a given area for 50ms before the sonar has moved on.

While it’s very possible that my power estimate is off the mark, the difference between the estimate that was made and a level where there are potential health concerns is significant enough that I’d say it’s fair to assume the Ping360 is safe for use around humans.

If there are any remaining concerns, it’s worth also noting that clothing and hair will reflect/absorb a decent amount of the sonar energy too.

I understood it, thanks a lot for your detailed reply.