( As a heads up, I have sent this to the BlueRobotics support email as well)

I’ve been having an on-going issue with the batteries I’ve purchased. The first battery I bought was a BlueRobotics black Lithium-ion Battery (14.8V, 18Ah), and it was working great until my battery enclosure leaked, and the charging connectors got corroded. I tried to charge it, and it didn’t detect all four cells – it only detected three cells. I couldn’t fix that error even after replacing the wires and connector.

I then bought the smaller white Lithium-ion Battery (14.8V, 15.6Ah); the same issue happened, but there was no enclosure leak this time. I wasn’t able to charge the battery with the HTRC C150 charger that I had. It was reporting only 3 cells detected out of 4. I was able to use the battery, but it drained down to 5V and couldn’t be charged due to low voltage. I discarded the HTRC charger and bought the BlueRobotics H6 PRO Lithium Battery Charger, but again it still had the same problem. Only three out of four of the cells displayed a reading for both the new white battery and the old black battery, though they report different cells not being able to be detected. The BlueRobotics charger is not letting me charge as well, saying it’s not detecting the correct number of cell configurations.

Could it just be over-discharge? Any advice is greatly appreciated!

I left this originally, given it was already being handled via the support email.

If someone else comes across this, here’s the main information:

It was reporting only 3 cells detected out of 4. I was able to use the battery, but it drained down to 5V and couldn’t be charged due to low voltage.

In our battery safety information we recommend

5V total voltage (~1.25V/cell) is significantly below the “never” threshold. Attempting to recharge a lithium ion battery with such a low cell voltage may result in fire.

I’m unsure how that 5V reading was determined. If it was the directly measured voltage across the battery terminals (used by our charger, and probably most others) then either the charger is faulty, or the battery is definitely dead and should be recycled. If instead it was the sum of the measured cell voltages (which may be used by our cell checker - I’m unsure how it’s set up internally) then it’s possible there’s just an issue with the cable/connector, which could stop one or more of the cells from being detected.

Voltages can be confirmed with a multimeter, if you have one: 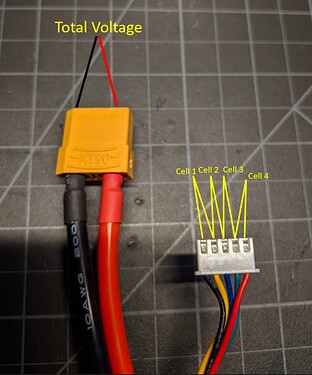